EUCAM is constantly looking out for interesting scientific publications on the subject of alcohol marketing in the broadest sense. A number of articles that have been published over the last six months prompted us to disseminate their conclusions in news articles. However, there has been such a great number of important studies that we have decided to round them up in a single overview of the recent literature.

Early this year Addiction published ‘How does the alcohol industry attempt to influence marketing regulations? A systematic review.’ In this review Emily Savell (University of Bath & UK Centre for Tobacco and Alcohol Studies) and co-authors reviewed seventeen papers and concluded that:

“The industry’s opposition to marketing regulation centres on claims that the industry is responsible and that self-regulation is effective. There are considerable commonalities between tobacco and alcohol industry political activity, with differences due potentially to differences in policy contexts and perceived industry legitimacy.”

Earlier this month BMC Public Health published ‘Immediate effects of alcohol marketing communications and media portrayals on consumption and cognition: a systematic review and meta-analysis of experimental studies.’ Lead authors Kaidy Stautz and Kyle G. Brown of the University of Cambridge’s Behaviour and Health Research Unit searched for experimental studies assessing immediate effects of exposure to alcohol marketing communications on objective alcohol consumption (primary outcome), explicit or implicit alcohol-related cognitions, or selection without purchasing (secondary outcomes). They identified 24 studies which met the inclusion criteria. Their meta-analysis of 758 participants (all students) shows that viewing alcohol advertisements (but not alcohol portrayals) may increase immediate alcohol consumption by small amounts, equivalent to between 0.39 and 2.67 alcohol units for males and between 0.25 and 1.69 units for females. The authors remark:

“Whilst the evidence from experimental studies is currently limited, the results of this systematic review do, in our view, lend some qualified support to the public health case for restrictions, bans, or other policies that would reduce exposure to alcohol advertising on visual broadcast media to reduce alcohol consumption. Importantly, whilst the individual-level immediate effects found here may be small, such effects could, if sustained in response to overall reduced exposure over time, have a meaningful impact on consumption at the population level.”

Just as this systematic review was published a new experimental study appeared, which may have also met the inclusion criteria. In ‘Saw It on Facebook, Drank It at the Bar! Effects of Exposure to Facebook Alcohol Ads on Alcohol-Related Behaviors,’ Saleem Alhabasha and his colleagues from Michigan State University, through an experimental setting show the effects of exposure to Facebook alcohol advertisements on intentions to consume alcohol and alcohol-related behaviours. 121 participants were exposed to ads on Facebook, one group viewing ads for a brand of beer, the other a brand of bottled water. At the end of the study, as an incentive for taking part, the participants were offered one of two gift cards – one for a bar, the other for a coffee shop. Of those who saw the beer ad, 73 percent chose the bar card. Of those who saw the water ad, only about 55 percent chose the bar card.

“What this tells us is there is an effect and it can be attributed to the sheer exposure to these messages,” said Alhabasha in a press release accompanying the publication.

Addiction published online a new study from the dataset that the team of Thomas Babor compiled from monitoring international broadcasts of the 2014 FIFA World Cup tournament. In ‘Alcohol Marketing in the Americas and Spain during the 2014 FIFA World Cup Tournament,’ lead author Jonathan K. Noel performed a qualitative analysis of 87 alcohol advertisements from 20 world cup matches. This analysis found that 86.2% of all unique alcohol advertisements contained at least 1 violation of the industry’s self-regulation codes, with violation rates ranging from 72.7% (Mexico) to 100% (Brazil). Countries with the least restrictive marketing policies had a higher prevalence of violations in guidelines designed to protect minors.

Spotlight on online alcohol advertising
Our EUCAM colleague Avalon de Bruijn published a study on the effects of online exposure to alcohol advertising in Alcohol and Alcoholism. In ‘Exposure to Online Alcohol Marketing and Adolescents’ Drinking: A Cross-sectional Study in Four European Countries, ’ de Bruijn and her colleagues surveyed more than 9,000 students around the age of 14 at schools in Germany, Italy, the Netherlands and Poland. The study found that online alcohol marketing exposure was found to be related to the odds of starting to drink and the odds of binge drinking in the past 30 days. This study is the first that has examined the impact of different levels of frequency of exposure to (online) alcohol marketing practices and the first cross-country study that examined the impact of alcohol advertising on adolescents’ drinking behaviour.

Novel method of measuring TOTAL exposure
‘Alcohol Advertising Exposure Among Middle School–Age Youth: An Assessment Across All Media and Venues.’ Is a particularly interesting American exposure study published in the Journal of Studies on Alcohol and Drugs. Rebecca Collins and her colleagues of the Rand Corporation outfitted 589 children between the ages of 11-14 with a handheld computer to log their exposure to all kinds of alcohol advertising for 14 days straight. This makes it the first study to estimate total amount of alcohol advertising exposure among youth. The study found that African American and Hispanic youth are exposed to an average of 4.1 and 3.4 advertisements per day, respectively, nearly two times as many as non-Hispanic White youth. Girls were exposed to 30% more advertisements than boys. Most exposures were to outdoor advertisements, with television advertisements a close second. 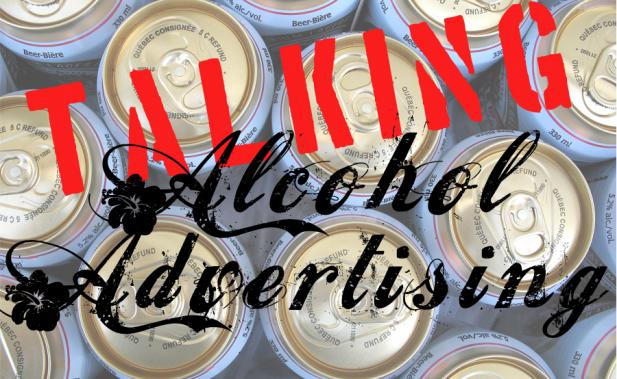