Reliance on voluntary action by alcohol firms to curb drink-related harm has been a failure, according to a hard-hitting report by the Institute of Alcohol Studies. The “public health responsibility deal” unveiled during the last UK government has resulted in broken promises and too little being done to reduce alcohol problems.

In the report, the Institute of Alcohol Studies (IAS) states: “[The responsibility deal] appears to have been the main element of the UK’s alcohol strategy in recent years and has been used by the industry to resist more effective policies. If this is the case, the responsibility deal has worsened the health of the nation, and so must be considered a failure.”

The IAS, a non-industry-funded thinktank, found that, under the deal, drinks producers have shunned policies that would work but would also hit their sales, promoted approaches that do not work, and exaggerated how much difference the policies they have adopted have actually made.

“The RD has systematically focused on relatively ineffective interventions that are unlikely to reduce alcohol consumption. It has set up its pledges in ambiguous terms that resist assessment,” says the report. “The alcohol industry has obstructed rigorous evaluation of the RD, through the unreliability of its progress reports, and more damningly through its misconduct in the official evaluation process.”

Katherine Brown, IAS director and one of the report’s authors, said that both hospital admissions and deaths due to alcohol had continued to rise, in spite of overall alcohol consumption falling slightly. “Perhaps most worryingly, the report indicates that the deal may have delayed evidence-based actions that would save lives and cut crime, such as minimum pricing. To call this a ‘public health responsibility deal’ for alcohol is laughable, as almost every independent public health body has boycotted it.”

The RD’s failure meant it would be “absurd for this government to continue with such a farcical initiative. With alcohol costing our society £21bn each year, we can’t afford to keep prioritising the needs of big business over public health,” she added.

The report isn’t exclusively negative however, it praises praise drinks firms for agreeing to stop advertising within 100 metres of schools. It also hails genuine “progress” on the number of alcohol products carrying warnings about drinking during pregnancy, safe drinking guidelines and the number of units contained. 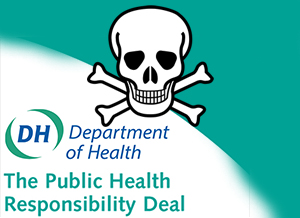