A new report by Alcohol Concern suggests that UK viewers of the televised key World Cup matches this summer saw one example of alcohol marketing for every minute of playing time. Following these findings, the charity is asking their government to ‘consider whether the harms outweigh the financial benefits’, as the audience included ‘millions of children and young people’.

Researchers from Alcohol Concern studied six matches – two shown on the BBC and four on ITV – including all of the England games, the semi-finals and the final. The frequency analysis used a coding protocol earlier developed and tested by Graham and Adams (2013) and Adams, Coleman and White (2014), with the broadcasts recorded and coded according to the number of visual references to alcohol, including logos.

This analysis brought to light an average of just under 100 alcohol references per programme, plus ten alcohol commercials when the games were shown on commercial broadcaster ITV. Around 80 per cent of the references were from electronic pitch-side sponsor boards, with more than two-thirds for official World Cup beer sponsors Budweiser, while the 39 alcohol adverts shown during the four commercially broadcast games totalled more than 12 minutes.

‘It is estimated half the games analysed were viewed by more than one million under-18s,’ says the report by Alcohol Concern, a figure that’s allowed within the existing UK rules governing whether alcohol advertising is appropriate. Following the findings, the report formulates two policy recommendations: Firstly, to phase out alcohol marketing in sports; Secondly, to enforce stronger regulations concerning the number of minors allowed to be exposed to alcohol marketing.

Alcohol marketing reduces the age at which young people start to drink, increases the likelihood that they will drink and increases the amount of alcohol they will consume once they have started to drink. According to Alcohol Concern programme policy manager Tom Smith “the volume of alcohol marketing in sport, especially in football which is popular with children and younger people, is enormous. Sport should inspire active participation and good health, not more drinking. To protect the younger generation the government needs to implement the phased removal of alcohol marketing from sport, as it has done with tobacco. If a million children can be exposed to alcohol marketing on TV and no rules be broken, we should also look at whether the existing rules that are meant to protect our kids are really working.”

The report: Alcohol Marketing at the FIFA World Cup 2014: A Frequency Analysis is digitally available from the Alcohol Concern website. 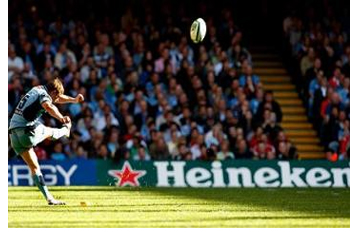