The government of Cambodia has introduced restrictions for broadcasted alcohol advertisements, in an effort to ‘reduce the number of fatalities resulting from drunk driving.’

Going into effect on October first, television and radio stations will be prohibited from broadcasting alcohol advertisements between 6 p.m. to 8 p.m., according to the Ministry of Information. Following this 2 hour time ban, will be a more general ban on beer and liquor advertisements, going into effect in January of 2015. However, details of the 2015 ban have not yet been made public.

“We will ban the broadcast of alcohol advertisements from 6 p.m. to 8 p.m., because a lot of people [tune in] during this time,” Mao Ayuth, secretary of state at the Ministry of Information told The Cambodia Daily.

According to the Cambodian National Road Safety Committee, 1,956 people died in traffic accidents last year. Thirteen percent of the fatalities were the result of drunk driving.

Mr. Ayuth said Information Minister Khieu Kanharith met with television and radio station executives at the ministry Monday to warn them that they had until the end of the month to comply with the directive.

“We gave a month to the owners of the radio and television stations because they have contracts [with advertisers],” Mr. Ayuth said, adding that alcoholic-beverage companies promoting their products on television would still be permitted to pay for their logo to be displayed on screen. 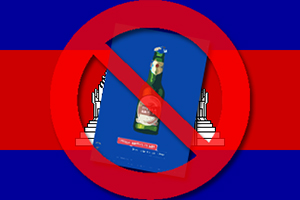