A group of UK members of parliament have jointly lashed out against the current self-regulatory system of alcohol advertising. The cross-party group of MPs say that the current system is not robust enough to protect children and argue for its replacement by a regulatory system embedded in the law. The group’s views have been set out in an alcohol policy manifesto developed in preparation of the 2015 elections.

The All Party Parliamentary Group (APPG) on Alcohol Misuse, are calling for more “meaningful sanctions” to react to violations of the advertising code. The current system knows no financial penalties, which according to the group would form a sensible policy measure to stop alcohol brands excessively targeting children. “The regulator needs meaningful sanctions, such as fines, that deter non-compliance,” the group set out in their manifesto last week.

The group also argues in favour of restricting sponsorship of sporting events by alcohol companies: “Children can’t make responsible decisions about their drinking if they grow up bombarded by excessive alcohol marketing. Yet our marketing regulations are failing to protect the youngest in society. Regulation must be statutory and independent of both the alcohol and advertising industries.”

Alcohol industry body The Portman Group as well as the Advertising Standards Alliance (ASA) both reacted negatively to the notions of the All Party Parliamentary Group. A spokesman for the ASA insists there is already “independent and effective” regulation of alcohol advertising despite it being regulated and judged by industry stakeholders.

The APPG says tobacco-style health warnings should be included on all labels. The group wants to see evidence-based health warning as well as the drink’s nutritional, calorific and alcohol content.

Conservative chair of the group Tracey Couch MP says: “The facts and figures of the scale of alcohol misuse in the UK speak for themselves: 1.2 million people a year are admitted to hospital due to alcohol; liver disease in those under 30 has more than doubled over the past 20 years; and the cost of alcohol to the economy totals £21bn. There must be a more thorough and full package of measures which tackles the problem more effectively and reduces the costs to people’s health of alcohol-related crime and treatment.”

The manifesto can be found here>> 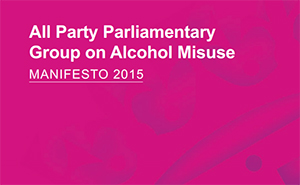