New research: How movies may make you drink more

Alcohol use is widespread in contemporary movies, often portrayed positively or even glamorized. Unlike alcohol advertisements, movies display alcohol in a more subtle way, yet little is known about how these portrayals affect a viewer’s experience and engagement in the movie. A study of the effects of alcohol portrayals in movies has found that positive and negative portrayals of alcohol can contribute to viewers’ emotional involvement or “transportation,” attitude towards, and evaluation of the movie.

Results will be published in the July 2014 online-only issue of Alcoholism: Clinical & Experimental Research and are currently available at Early View.

“Viewers are often not aware of alcohol portrayals in movies,” said Renske Koordeman, who wrote her dissertation on the topic while at Radboud University Nijmegen, and is the corresponding author for the study. “Product placement is more subtle than general ads, occurring when a company pays movie makers to portray its brand in a movie. Strategies to embed advertisements in a movie context with appealing actors – and without viewers’ conscious processing of the intentions of the message – might be even more powerful than general advertising strategies since the message is not perceived as advertising. In addition, people are probably more involved in a movie than in an advertisement break, which is often used to do something else.”

“It is my understanding that alcohol portrayals are depicted in the majority of movies, 80 to 95 percent, and that they are mostly framed or portrayed in a positive manner,” remarked Marloes Kleinjan, an assistant professor of developmental psychopathology at Radboud University Nijmegen. “Exposure to alcohol portrayals in the media – including movies, but also advertisements and digital media such as Facebook – can encourage drinking in young people. Since movie characters can be regarded as role models by young people, the manner in which these characters portray alcohol use in a movie might have an impact on the beliefs and attitudes toward alcohol use by youngsters themselves.”

Koordeman and her co-authors used a within-subjects design in which participants were exposed to eight different movie clips containing alcohol (positive or negative context), or no alcohol portrayals, in a controlled lab setting. A total of 159 college students (84 males, 75 females), 18 to 30 years of age, participated in the experiment. Transportation and attitude towards the movie were measured for each participant after each movie clip.

Both Koordeman and Kleinjan agreed that the way and context in which alcohol is portrayed might play a role in the effects of movie alcohol portrayals.

“Stronger effects of negative events over positive events are found in various aspect of life,” said Koordeman. “For example in social network patterns, in learning processes, and in interpersonal interactions. This process might also be extended to media effects.”

“In most western cultures, moderate drinking has a social function,” added Kleinjan. “It can act as a social glue and has several positive consequences, such as the reduction of social anxiety and facilitation of interpersonal communication. Also, most people drink alcohol, making it the more normative behavior, especially the case in so-called ‘wet’ social situations such as parties. Thus, not showing alcohol consumption in situations where it is expected in the movie may lead to a more negative assessment of that movie, because it comes across as less realistic. Simply put, I think ‘bad’ makes for better and more dramatic television. Seeing that bad is stronger than good, people are more likely to pay more attention to the negative.”

Kleinjan added that previous research has found linkages between movie exposure to tobacco and alcohol and actual consumption. “However, stronger restrictions have been placed on marketing tobacco and on the public display of cigarette images,” she said. “This is less the case for alcohol use; alcohol use/portrayal is allowed to be more self-regulated by the industry. Given the severe health consequences of excessive alcohol use, one might consider marketing policies similar to tobacco, which might include stricter rules and regulations regarding the depiction of alcohol use in the media. Another possible option is to broadcast movies that portray alcohol use after prime time, which might reduce the chances of young people watching the movie and consequently reduce exposure. Also, educating young people by means of media literacy programs might create more awareness about the effects of alcohol portrayal in the movies. Finally, earlier in life, parents and children can co-view programs so that parents can explain what is portrayed and put this into the right perspective.”

Alcoholism: Clinical & Experimental Research (ACER) is the official journal of the Research Society on Alcoholism and the International Society for Biomedical Research on Alcoholism. Co-authors of the ACER paper, “The Effect of Positive and Negative Movie Alcohol Portrayals on Transportation and Attitude towards the Movie,” were Doeschka J. Anschutz and Rutger C. M. E. Engels of the Behavioural Science Institute at Radboud University in Nijmegen, the Netherlands. This release is supported by the Addiction Technology Transfer Center Network at http://www.ATTCnetwork.org. 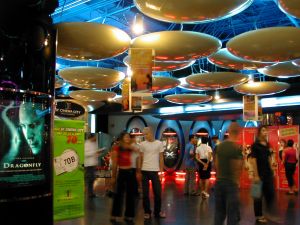