Alcohol companies using social media to get around regulations

Australian researchers argue that the alcohol industry uses social media to get around advertising regulations and to let consumers mount their marketing pitch for them. This conclusion follows a content analysis of the activity of the top 20 alcohol brands on Facebook in Australia.

The new research, executed by Dr. Nicholas Carah of the University of Queensland was commissioned by FARE, the Foundation for Alcohol Research and Education. Among the findings were figures indicating that by the end of 2012 the most popular twenty alcohol brands had 2.5 million followers on their Australian Facebook pages. During the year they posted more than 4,500 items of content. Their followers interacted with that content – liking, sharing and commenting on it – over 2.3 million times. “These figures suggest that Facebook is now a key player in the promotion of alcohol,” according to the report ‘Like Comment Share: Alcohol brand activity on Facebook’.

Dr Carah said alcohol brands use Facebook to get consumers to collaborate in the creation and circulation of brand messages. “Our current regulation doesn’t address consumer collaboration, let alone what types of consumer collaboration are appropriate,” he said. Facebook provides alcohol companies the ability to reach millions of consumers without paying for traditional advertising, allowing it to invest more in culturally embedded forms of marketing such as sponsorship, popular culture, viral content and real-world activations: “Harnessing the power of Facebook, alcohol brands can shift their marketing resources to below-the-line activities that are less visible to authorities and regulators,” according to Dr Carah.

On Australian media website Mumbrella Dr. Carah and his Bond University colleague Sven Brodmerkel further elaborate that Facebook allows alcohol companies to invite consumers to say things that fall outside the alcohol marketers’ self-regulatory code. “But, consumers say those things after being prompted by a brand. And, as observations over time show, the responses of consumers are fairly predictable.”

Furthermore, according to the report brands strategically arranged the timing of their posts to fit in with the drinking rituals of Australians. Accordingly, the most common time to post was on Fridays between 3pm and 5pm.

FARE, who funded the research, wants the Australian government to tighten regulations concerning alcohol marketing on social media. “The current industry self-regulatory regime, as weak as it is, in dealing with traditional forms of alcohol advertising, was established in a pre-Facebook world, and as such, is simply not capable of addressing the types of aggressive and pervasive advertising and promotion that we see today so entrenched in Facebook,” FARE chief executive Michael Thorn told the News.com.au.

The full report can be downloaded from the FARE website>> 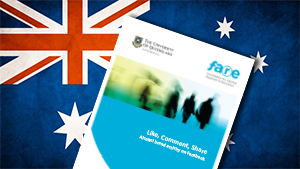