Breuer & Intraval, the Media Loket and Dialogic have visited supermarkets, catering establishments and cinemas for this study. Furthermore, the reach and media spending of alcohol advertisers were analyzed and “non-spot” advertising on television was examined. An analysis was also made of marketing practices about 0.0 variants. Finally, a monitor has been created to visualize alcohol marketing on social media.

Although there are large differences between supermarkets in the amount of alcohol marketing that is found, it can generally be said that there is a high degree of exposure through product placement.

Looking at catering establishments, the researchers particularly encountered premiums (logos on taps, draining mats, beer mats, glasses, etc.). In most catering establishments we see between three and six different premiums (indoor and outdoor combined). Outside (on the terrace or at the entrance) one or more forms of alcohol marketing (premiums and advertisements) have been observed in almost three quarters (72%) of the catering establishments. This mainly concerns billboards attached to the facade (47%), followed by separate billboards (19%) and glasses (11%). Exposure to these forms of alcohol marketing is high because they are also visible without the opportunity to visit. In particular, separate billboards (often along the walking route) and luminous billboards stand out. The observations show that more alcohol advertising is present in cafes – especially in the so-called ‘brown’ cafes – than in eateries and restaurants. However, expressions in brown and party cafes seem less worrisome, because these venues are visited less frequently by young people aged 12-17 and the chance of confrontation is therefore lower.

In two thirds (66%) of the 38 cinemas visited, the researchers found alcohol marketing in the form of premiums. The most common premiums are; glasses (39%), felt pads (29%), advertising on tap (16%) and dish draining mats (8%). We have seen product placement in just over half of the cinemas. This mainly concerns alcohol in large refrigerators with a brand name and / or logo. Advertisements (often on television screens suspended from the ceiling or above the till) have been seen in two fifths (42%) of the cinemas. A frequently occurring form is advertisements in the form of a recommendation or “combi-deal”, in which it is recommended to combine a snack with a matching alcoholic drink. Commercials with alcohol advertising were shown in 26% of the cinemas. Alcohol commercials appear to be more common in 16+ films, but alcohol ads have also been seen in films with different viewers (12 years or younger and all ages). There are some cinemas that explicitly keep alcohol advertising out of the door.

On television, the chance of confrontation for young people aged 12-17 years (89% saw an average of 61.5 alcohol advertisements on television in the second half of 2019) is weighted by viewing time, just as high as for people in the age categories 18-30 years and 30+. An unexpected finding, given that the Dutch Media Act lays down rules for public and commercial broadcasters with regard to the broadcasting of alcohol advertisements to limit exposure among young people. 34 of the 55 different commercials showed people consuming the alcoholic product. Advertising for 0.0% alcohol on television reaches many young people aged 12-17 years: 69%. The research results make it clear that legal regulations and self-regulation appear to be ineffective. In any case, they do not prevent young people from often being confronted with alcohol marketing practices.

On social media, young people are shown both sponsored alcohol advertisements and (intentional or non-intentional) alcohol advertisements via, for example, vlogs of influencers. This applies to all popular platforms. The impact of these alcohol ads is likely to be highest on Instagram and YouTube, as these are the most popular platforms among young people. It is striking that a large number of young people indicate that they (also) have and use an 18+ account. As a result, young people avoid age filters and the risk of exposure increases. The researchers consider this a point of attention. 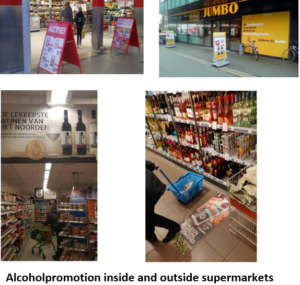