The new charity, formed by the merger of Alcohol Concern and Alcohol Research UK, said the Portman Group’s role was not clear.

A charity has called for a Government review of how alcohol marketing is regulated, claiming the current watchdog is inconsistent and operates without scrutiny.

The new charity, formed by the merger of Alcohol Concern and Alcohol Research UK, said its investigation of 12 years of regulatory decisions by the industry-funded Portman Group found inconsistent decisions, meaning that neither producers nor consumers could rely on it for guidance.

It also said there was no appeal body for the watchdog’s decisions, and claimed that its role in reducing alcohol-related harm was “neither clear nor explicit”.

The report noted that the Advertising Standards Authority regulated alcohol advertising and Ofcom handled alcohol industry sponsorship of television programmes, claiming neither they nor the Portman Group were “seeing the full picture”.

It suggests an overhaul of alcohol marketing regulation as part of the Government’s new national alcohol strategy, announced in May.

The charity’s chief executive, Richard Piper, said: “With roughly one person in the UK dying as a result of alcohol every hour, alcohol is no ordinary commodity, and we as a society have the right to set boundaries on the ways in which it is promoted.

“The current regulatory set-up doesn’t work. The UK Government could change that by initiating an independent review.

“The aim must be to make alcohol regulation fit for purpose, and ensure that regulators have a clearly defined remit and standards of evidence-based decision-making.”

Portman Group chief executive John Timothy said: “Our Codes of Practice set high standards for alcohol producers. The Codes provide a framework for the independent complaints panel to consider complaints and are regularly reviewed through open and public consultation.

“Our rules apply equally to all alcoholic products and producers and we offer a free and confidential advisory service to prevent irresponsible marketing appearing in the first place.

“The reality of regulation on a statutory footing would be a slower and less efficient system than the current self-regulatory approach and an additional burden on the UK taxpayer.” 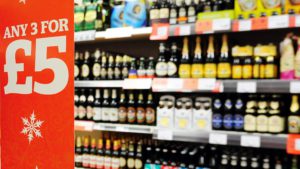