The debate surrounding the banning of alcohol advertising sponsorships in sport is raging on, and advocacy group the Southern Africa Alcohol Policy Alliance (Saapa) held discussions on Wednesday to explore alternative funding options.

“We want to prevent harm in our society. What we are saying is that the amateur sports industry has the capacity to move forward without this advertising,” said Professor Leslie London from the University of Cape Town’s health and science faculty.

According to Saapa, 25% of young people binge-drink and 12% of under 13-year-olds said they had drunk alcohol in the past month.

“There are 171 deaths every day due to alcohol and 78% of young people report seeing alcohol advertised through sport.

“Government spends R245billion annually on alcohol-related harm. We understand the concerns of the SABC and newspapers who rely on these adverts, and we believe there are other ways to prevent alcohol being advertised,” London said.

Earlier this year, the Department of Health said it was seeking a ban on alcohol advertising in the controversial Liquor Amendment Bill that is before the cabinet.

If Parliament passes the bill, it could result in alcohol advertising on radio and television being banned from 6am to 10pm and the age limit for drinking being raised from 18 to 21 years.

“I think we are targeting mostly adverts because of youngsters who see alcohol being glamorised,” said Professor Neo Morojele, chief specialist scientist and the deputy director of the Alcohol Tobacco and Other Drug Research Unit at the South African Medical Research Council.

She said the only way alcohol consumption could be reduced was if government intervened.

“Obviously alcohol will still be around, but the only way we (can) reduce consumption is through legislation and clamping down on illegal liquor outlets in communities, which is a huge problem.” 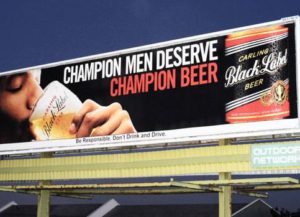