Due to FIFA World Cup: restrictions on advertising beer in Russia eased?

According to Russian RMAA Group, the prohibition on any advertising for beer has been eased because of the upcoming Football World Cup Championship in 2018. Did the FIFA exert such pressure that alcohol marketing is relaxed for 3 years – as part of the agreement with sponsors?

In 2018, the Football World Cup will be organised in Russia. According to the Russian RMAA Group, the prohibition on any advertising for beer on radio, TV, printed media and online has been eased until the end of 2018 because of the upcoming Football World Cup.

Chris Brookes, Director of the UK Health Forum states that “It is inappropriate that FIFA can demand that countries relax rules which protect their citizens and in particular children from the harm caused by alcohol.”

The FIFA has taken a very strong position regarding alcohol during World Cups. As stated by Jerome Valcke (FIFA’s secretary) in 2012: “Alcoholic drinks are part of the FIFA World Cup, so we’re going to have them. Excuse me if I sound a bit arrogant but that’s something we won’t negotiate,”  as FIFA campaigned against the ban in Brazil. “The fact that we have the right to sell beer has to be a part of the law.”

Furthermore, “umbrella branding” is promoted by the RMAA Group, in order to avoid the advertising limitations that are still in place (e.g. not depicting human or animal characters). However, advertising non-alcoholic beer can have a large impact on establishing the alcoholic brand as such, because the same brand name is used for promoting non-alcohol and alcoholic products. 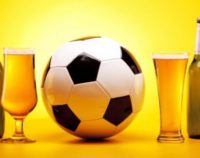