Example from a current beer label with nutritional information from the Netherlands.

The Local Government Association of the U.K. has renewed a push for alcohol producers to label beverages with caloric information. The association says the labels are necessary because the public is largely unaware of the amount of empty calories in alcohol, which may be related to high obesity levels in the country.

Associations Now reports that the Local Government Association, which represents more than 370 councils responsible for public health in England and Wales, has called for alcohol producers to post caloric information on all bottles and cans. Associations Now quotes LGA Community Wellbeing Spokeswoman Izzi Seccombe: “Most people are aware that excessive alcohol can lead to serious health problems like liver and heart damage, and an increased risk of cancer,” (…)  “However, the amount of calories from an average night’s drinking isn’t so well-known. People should be able to make informed choices.”

EUCAM was surprised to learn that apparently UK brewers are not putting nutritional information on their products, since last year the Brewers of Europe tooted their own horn about their voluntary labeling scheme, in which they include nutritional information per 100 mg (which even their colleagues of Spirits Europe called misleading). We could not find any information (except broken links) about this subject on the website of the British Beer and Pub Association. 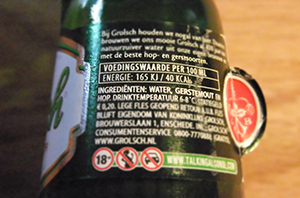