The study found the Facebook pages of Australia’s most popular alcohol brands are filled with highly inappropriate content that glamorises and encourages excessive drinking and features crude and offensive language, and derogatory, vilifying and sexist remarks.

A landmark complaints case in 2012 ruled that these Industry Codes of Practice should apply to alcohol marketing on Facebook and, importantly, that page administrators were responsible for moderating user-generated content.
But according to the report author, Dr Nicholas Carah of the University of Queensland, very few alcohol brands are complying.

They found at least 76 regulatory breaches in the sample, with offending content posted by both the brand and its fans.

“Instead of moderating user comments in this interactive environment, the Facebook pages pose questions that prompt predictable consumer responses which breach the codes. Alcohol brands repeatedly use this marketing tactic to encourage fans to say things the brand is prohibited from saying,” says Dr Carah.

Time and date specific Facebook content – linking alcohol with special events such as public holidays or everyday rituals like finishing work ahead of a weekend – was the most likely to offend, with almost one in five posts on a Friday (17.8%) clearly breaching the ABAC and AANA codes. The vast majority of these breaches (83%) referred to excessive alcohol consumption.

“Alcohol brands are clearly not complying with their self-regulatory advertising codes. What’s even more concerning is that the alcohol’s industry’s own advertising code was revised since this research was undertaken, making it even easier to engage with consumers online. The current system is ill-equipped to define, monitor or enforce alcohol brand activity on Facebook. It’s very clear from the breaches identified in this study that alcohol companies are very happy to exploit the situation to their own advantage, but when we are talking about a product as harmful as alcohol, that’s simply not good enough,” Mr Thorn said.

Mr Thorn says the findings are yet another example of industry’s complete disregard for community standards.
“Here we have the alcohol industry blatantly breaching its own code, in order to maximise profits but it’s not alone.

At the same time, the commercial television industry is attempting to change its own code so as to allow for even more alcohol advertising on our TV screens. In doing so, both the alcohol and television industry are far out of step with what the community finds acceptable, and remind us that the only one benefitting from self-regulation is industry itself,” Mr Thorn said. 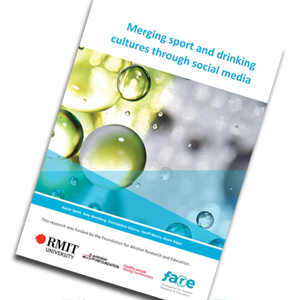