Alcohol promotion through smartphone apps: In breach of regulations?

New research by James Cook University in Australia has revealed weaknesses in the law regulating alcohol promotion after reviewing smart phone apps carrying alcohol promotional material. Furthermore the study raises questions about the ethical stance of organizations such as Google and Apple for providing access to apps which encourage intoxication as well as competing in who has the highest alcohol blood level.

The authors stress that while there’s a growing wealth of publications on various forms of alcohol marketing (and its effects) they found there were no studies specifically examining smartphone apps promoting alcohol.

The study lead by Professor Lynne Eagle, whose team searched for apps for Android and iPhones using the search terms ‘alcohol’, ‘drinking’, ‘drunk’, ‘alcoholic’, and ‘alco*.’ This resulted in 241 free apps and 41 paid apps. Nearly 80% (221) of the identified apps were categorized as ‘pro-alcohol consumption’, more than a third of these were designed to reinforce positive behavior towards alcohol consumption.

Alarmingly, none of the identified apps had any age-restricted security measures in place.

Among the identified apps where ‘Drink Thin’, which promotes an alcohol only diet as a weight loss measure, as well as ‘VegeTippie Free’ which provides an alcoholic database for vegetarian drinkers. Apps categorized pro-alcohol promoted heavy consumption of alcohol in Apps like “Let’s get WASTED! Drinking Game” which encourages intoxication and uses the traditional alcohol calculator and Breath Analyzing features to compete with friends for the highest alcohol readings.

The authors note that many of these apps are in breach of regulations and encourage further research on alcohol promotion through smartphone apps and its effects. 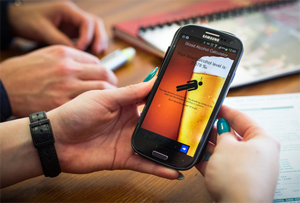