The UK’s national charity Alcohol Concern is calling for the regulation of alcohol marketing to be statutory and independent of the alcohol industry. This comes after a new report has shown how big alcohol companies cannot be trusted to promote moderate drinking.

The report ‘Creating customers’ looks at how the major alcohol producers are constantly on the lookout for new ways and places to sell alcohol, and new people to sell it to – in the UK and around the world. It also highlights how the industry undermines it own pledges to encourage the safe use of alcohol.

Examples cited in the report include:

Alcohol Concern Director, Andrew Misell said: “Given the number of different ways the alcohol industry can now sell their products, the big question is whether the people who make more profits the more alcohol we drink are really the best people to advise us on how to use it safely and healthily.

“Given the obvious conflict between the alcohol industry’s need to sell more alcohol and the need to promote moderate drinking, alcohol producers should have no role in drawing up information or policy on safe drinking.”

The report is being released just weeks after the Lancet Liver Disease report showed that the UK is the only country in western Europe, except Finland, where liver disease has increased over the past 30 years.

Andrew Misell, continued: “Positive portrayals of alcohol, whether in programming, through product placement, or advertising encourage drinking. Where alcohol advertising is permitted, we believe the UK should follow the French example of only allowing factual messages and images that refer to the characteristics of the product: its origin, composition, strength, and means of production. Images that show drinking as part of an attractive lifestyle or social occasion should no longer appear in adverts.” 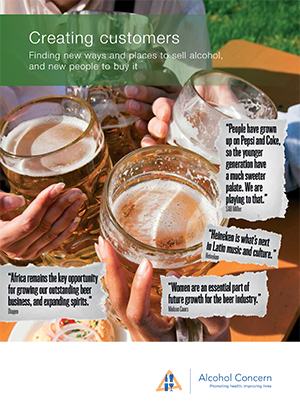