Martina Anderson, Member of the European Parliament for the Northern Ireland party Sinn Féin has called for a ban on alcohol advertising in the European Union. Ms Anderson made the call during Awareness Week on Alcohol Related Harm.

“The European Union is the highest drinking region in the world resulting in huge level of harm, said the MEP. “Twelve per cent of children across the European Union live in families adversely affected by alcohol (…) As well as the cost to health, alcohol-related harm also costs the economy more than €155 billion every year, of which €74 billion is a result of productivity losses. (…) Alcohol is linked to more than 60 diseases including cancer, liver and digestive diseases, alcohol dependency and depression.”

“At this morning’s event I asked the Commissioner for Health and Food Safety, Vytenis Andriukaitis, if he could commit to an advertising ban during his time in office.” Ms Anderson told that Andriukaitis “…agreed on the need for such a ban but acknowledged it will be a challenge.”

“I will continue to lobby for all measures to protect people from alcohol-related harm”, concluded the MEP.

Ms Anderson has previously been a vocal campaigner against tobacco advertising.

The Londonderry Sentinel interestingly notes that despite this stance by Ms. Anderson, the pension contributions of hundreds of public sector workers and local politicians – including Ms Anderson’s party colleagues – are still invested in alcohol, tobacco and arms companies, by way of the Northern Ireland Local Government Officers’ Superannuation Committee (NILGOSC) pension fund. 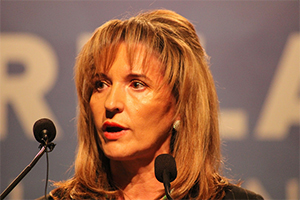