A recent observational supermarket study in the UK finds that placing products on the ends of aisles is associated with a large positive impact on sales of alcoholic and non-alcoholic beverages. Up till now the decision to place products at the ends of aisles was based on anecdotal evidence. Based on their findings the researchers raise the possibility of statutory regulations on the display of “high-risk” goods; similar to the strict regulations on the display of tobacco products.

The researchers of this observational study, looked at the effect of end-of aisle displays on the sale of three types of alcohol (beer, wine, and spirits) as well as three non-alcoholic beverages (both sugar- and artificially- sweetened carbonated drinks, coffee and tea). Information was collected on the layout of one UK supermarket and the sale of these alcoholic and non-alcoholic drinks during one year (2010-2011). The researchers looked to see if there was an effect of end-of aisle display on sales, after controlling for price, price promotion and the number of display locations for each product.

The study was carried out by researchers from the University of Cambridge, the University of East Anglia, and the Medical Research Council (MRC) Human Nutrition Research, Cambridge. It was funded by the Department of Health Policy Research Programme and published in the peer-reviewed open-access journal Science and Medicine.

After controlling for price, price promotion and the number of display locations for each product, the researchers found that end-of-aisle displays are associated with increased sale volumes:
-beer increased by 23.3%
-wine increased by 33.6%
-spirits increased by 46.1%

A limitation of this study is that it took data from one place at one point in time. Whether results would be applicable to other areas of the country is unclear. The researchers controlled for a number of confounding factors including price and price promotions. Though there could be other unaccounted for factors influencing the sale of alcoholic and non-alcoholic drinks. Consequently, to truly determine the effect of the location of items within a supermarket, an experimental study is needed where location of drinks is the only variable factor.

The full article can be found here>> 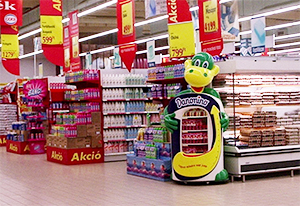