In 2010, the five NGOs participating in the AMMIE project selected 84 alcohol marketing practices that appeared to be in violation of existing national rules for self-regulation. We filed complaints against these practices at the national Alcohol Advertising Committees, who are to decide whether these complaints are to be upheld (or not).

The NGOs proceeded to ask five Youth Rating Panels from the participating countries to give their opinions on a selection of the complaints. In Denmark, 40 youngsters participated, in Germany 30, and in the Netherlands 37. In Italy, 57 young people were included in the first round, whereas the last group consisted of only 22 young people. In Bulgaria, 29 people took part in the first round, and in the fourth round 21 youngsters took part. Altogether, 199 young people between 12-18 years of age participated in one or more rounds. Their answers were compared to the decisions of the Advertising Code Committees. 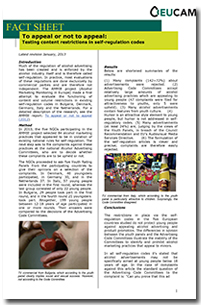