Diageo, one of the largest spirits and beer producers in the world, has developed a national DRINKiQ campaign together with the Dutch National Chamber of Student Associations.

Through this partnership, Diageo aims to provide student associations with informal tools to bring the theme to the attention of their members. During the Policy, Organization and Management Congress, 30 board members of student associations signed  their commitment to actively promote responsible alcohol consumption during the coming academic year.

The national campaign will take place online on news sites and social media in the form of a DRINKiQ platform and a quiz. According to the organizations behind the campaign, this gives people “the necessary knowledge in an informal way, so that they can make informed choices”.

Wim van Dalen, director of the Dutch Institute for Alcohol Policy STAP, is deeply critical of the campaign: “The campaign of Diageo suggests that the regular drinking of, for example, 4 x 33 cl beer by men and 3 x 33 cl beer by women improves your health. If you convert that to glasses, you get more than 5 standard glasses of beer for men and 4 for women! These numbers deviate strongly from the alcohol guideline of the Dutch Health Council and the Nutrition Center, which for men and women reads: Do not drink alcohol or at least no more than one glass per day. The amount that Diageo considers responsible is downright harmful to health and increases the risk of cancer, such as breast cancer in women. “

Van Dalen: “The campaign also suggests that drinking spirits is ‘better’ than drinking beer and wine because they contain fewer calories. Numerous studies show that the health risks of beer, wine and spirits are almost the same. . “

STAP finds it inacceptable that the Dutch student community, represented by the National Chamber of Associations (LKvV) supports and propagates the campaign among its members.

STAP therefore calls on the LKvV to immediately withdraw as a participant of the National Prevention Agreement of the Ministry of Health. 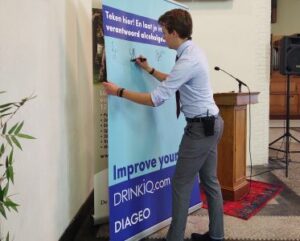