A new study published by Cornell University examined more than 200 individual media markets throughout the 2010s.

In 2012, many Americans were exposed to hundreds of television ads of alcohol products. A new study published by Cornell University examined more than 200 individual media markets throughout that year and found a correlation with drinking behavior.

The findings, posted online in the peer-reviewed journal Addiction, demonstrated that the more ads of alcoholic beverages shown, the more consumption of alcohol. Repeated exposure may reinforce drinking behavior.

In the study, conducted between 2010 to 2013, commercial data of broadcasting advertisements, featuring beer, wine, and hard liquor, were analyzed alongside data of the Simmons National Consumer Survey.

In that survey, over 50,000 adults inputted their drinking and television viewing habits. The data provided insight into the form of drinking ads shown during their television consumption.

“These ads are so ubiquitous, especially for certain types of audiences, that this cumulative, repeated exposure seems to have the potential to reinforce the behavior,” said Jeff Niederdeppe, in a news release. “Higher exposure to the ads is clearly and consistently linked to higher levels of drinking.”

As part of their findings, they determined that men were more exposed to beer commercials compared to women. Wine ads correlated with women significantly more than men, however, the number of those ads were fewer than beer ads.

“The average respondent was exposed to an estimated 576 televised alcohol advertisements in the year preceding their survey,” according to the study’s co-authors. “Exposure was higher among males versus females and African Americans versus whites.”

“There appears to be a small but consistent positive association between alcohol advertising exposure and drinking behavior among American adults.”

The patterns of drinking behavior observed in the study were consistent across all demographic groups and forms of alcohol.

Link to another article

Abstract of the study:

A total of 54 671 adults, aged 21 years and older, who were randomly selected to participate in the Simmons NCS.

Estimated exposure to televised advertisements for beer, wine and spirits, self‐reported alcohol use in the past year and number of drinks consumed in the past 30 days.

The average respondent was exposed to an estimated 576 [95% confidence interval (CI) = 570–582] televised alcohol advertisements in the year preceding their survey. Exposure was higher among males versus females and African Americans versus whites. A 1% increase in the estimated volume of advertisement exposure was associated with a 0.11 (95% CI = 0.08–0.13) percentage point increase in the odds of having at least one drink in the last 30 days and, among past 30‐day drinkers, a 0.05 (95% CI = 0.04–0.07) per cent increase in the number of alcoholic drinks consumed. Associations were consistent across product categories and demographics.

There appears to be a small but consistent positive association between alcohol advertising exposure and drinking behavior among American adults. 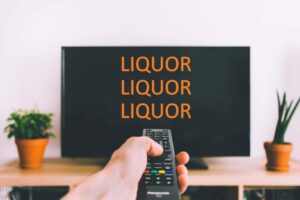