But practice shows that student associations are financially rewarded if their members drink more alcohol. These amounts can amount to tens of thousands of euros. Money that associations need to complete their budget, according to research from the regional radio station RTV Noord.

Student associations with their own bar are also a catering company. Just like those on-trade outlets, beer brewery associations financially encourage associations to sell as much beer as possible. This is done via a discount, the so-called hectolitre bonus.

The hectolitre bonus works via a graduated system. The more beer turnover, the higher the discount. That can go up to 75 percent. The discounts are already included in the budget. Figures in the hands of the regional broadcaster show that one association in Groningen receives more than 45,000 euros a year in hectolitre bonuses. This is given on a purchase of 60,000 euros. That means that the association ultimately pays 15,000 euros for the beer, instead of 60,000 euros.

Illustrations: beer tanks and the storage of spirits in the cellar of a Dutch student association (not in Groningen).

Beer brewers do this because student associations are a very interesting target group.

‘Beer broker’ Tom van Erven Dorens has many years of work experience with beer contracts. He has worked for beer producer Bavaria, among others. “Beer brewers do this because student associations are a very interesting target group. Students drink a lot of beer and if students are familiar with a beer brand, they are more likely to drink this brand for the rest of their lives.”

According to Van Erven Dorens, the Groningen student association Vindicat is one of the most popular targets for brewers in the Netherlands. “I think Vindicat has a deal where maybe they are even paid extra for an attractive contract.  It has also become a bit of a struggle among brewers, who gets Vindicat.” Vindicat rector Floris Hamann wants to say little about the contract with the beer brewer: “We will certainly pay for our beer. But I cannot say how much that is.”

If we want to achieve the highest discount scale, we organize a hectolitre bonus party at the end of the year says Remco Kattenberg, from student association Albertus Magnus

Some student associations do their utmost around December to get the most profitable agreement. To stay financially healthy they have to sell as much beer as possible. Special parties are given.

According to Remco Kattenberg of student association Albertus Magnus, it does not happen often, but it does happen. “If we want to achieve the highest discount scale, we organize a HeLB party (hectolitre bonus party) at the end of the year. This party is then with three associations, to sell as much beer as possible again. This evening the beer price will be even lower. “

Reactions of brewers
Beer brewers don’t want to say much about the discounts they give. “We cannot make any statements about commercial agreements and contracts with third parties,” says Esther de Vilder of Swinkels Family Brewers, which includes Bavaria. And a Heineken spokesperson also said: “We will never share competitively sensitive information with third parties.”

A spokesperson for Mayor Schuiling of Groningen acknowledges that the system of the hectolitre discount is in conflict with a covenant concluded at the end of June between the municipality and student associations. “But as a municipality we are of course not talking about the contracts between associations and brewers,” says the spokesperson. “But it would be good if the associations started to think about other ways of income.” 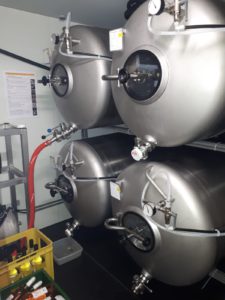