The Norwegian Government Pension Fund Global has invested around 10 billion US Dollars (81 Norwegian Kroner) in multinational alcohol corporations. A campaign by Norwegian civil society organisations has been launched to stop this. The main claim of the campaign is that investing in alcohol companies is incompatible with the overarching goals of Norwegian development and foreign policies.

The Government Pension Fund Global (GPFG) is one of the largest investment funds in the world, now owning 1.3 per cent of the global stock market the fund. The fund with a total value of more the 7.300 billion Norwegian Kroner (900 billion US Dollars), invests in around 8.000 companies all over the world. Close to 80 billion NOKs are invested in multinational alcohol companies. Half of this, 21 billion NOKs in ABInBev and 17 billion in SABMiller, is invested in two companies that are now merging to become the largest alcohol producer in the world. The investment portfolio also includes companies like Diageo, Heineken and Carlsberg. Such investments are now being challenged by the political campaign that aims to make the Government Pension Fund divest from alcohol production and the industry at large.

A campaign has been launched in Oslo on 21 September 2016, at which reference has been made to the Global Burden of Disease study that ranks alcohol among the top five of risk factors for disease and premature deaths globally. The Norwegian NGO campaign, initiated by FORUT, claims that it is unethical to build the future welfare of the Norwegian people on profits from a product that causes health and social harm to others, in particular when the harm caused impacts so many among the world’s poorest.

Continuous public debate around the investment policies and strategies of the GPFG has resulted in guidelines for ethical and responsible investments and a divestment list has been created, for which NGOs now advocate to include alcohol production. 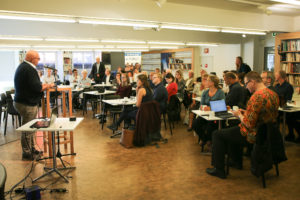