The three community ministers of Culture of the French, Flemish and German speaking communities of Belgium have submitted the nomination dossier to have the Belgium beer culture added to UNESCOs Representative List of the Intangible Cultural Heritage of Humanity.

A press release ascribed by the Walloon government, the Flemish government and the government of the German speaking community says that: “Belgium counts more than 1.000 beers and features the greatest choice of authentic, local and typical beers in the world. This incredible proliferation of colours, tastes and production methods is part of the pride of our cultural and gastronomic heritage.” According to the same press release, the dossier was researched meticulously by the qualified cultural services and prepared in cooperation with the Federation of Belgian Brewers.

The press release also suggests that the Federation of Belgian Brewers was the driving factor behind the nomination for protection as immaterial heritage of UNESCO. “Why do the brewers need protection?” one might ask. It seems that Belgian beer consumption is dropping and the brewers are thinking outside the box to safeguard their income. Besides nominating their beer culture for UNESCO protection, earlier they have asked the Belgians to consume more beer, and currently they are also campaigning for Belgians to be more proud of their beer. 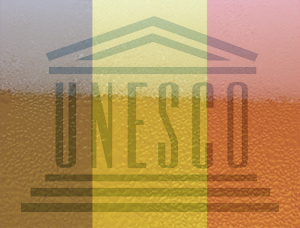