The effects of online marketing on drinking behaviors of young people

This review of currently available scientific literature shows exposure to online alcohol marketing leads to advancing the onset of alcohol consumption, increasing the amount consumed, as well as the frequency of consumption.

Gap in the literature
It has been well established by various studies that exposure to alcohol advertising affects the drinking behaviour of young people. Empirical- and review studies supporting this have been published in peer reviewed journals [1-4] and by the Science Group of the Alcohol and Health Forum of the European Commission [5]. However, there appears to be a gap in the literature and common knowledge when it comes to the specific measured effects of online alcohol marketing. To fill this gap, EUCAM initiated a non-systematic literature review which found 10 studies that in one way or another measured the effects of exposure to digital or online alcohol marketing on the drinking behaviour of young people. 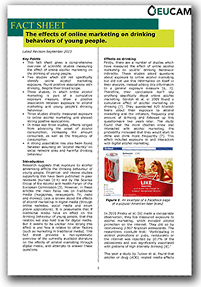