The Irish government is preparing legislation that forces alcohol producers to print health warnings on bottles, cans and all promotional material. Minister of Health James Reilly is still waiting on recommendations of the National Substance Misuse Strategy steering group before he makes definite decisions. However Mr. Reily has spoken out in favor of more comprehensive warnings about alcohol’s dangers.

The steering group which consists of officials from the Departments of Health and Community is examining a broad spectrum of possible alcohol policy interventions. The Irish Times reports that according to a department briefing note proposals that will be included in the recommendations are restrictions on below-cost selling and the introduction of warning labels.

Last week Mr. Reilly responded to a parliamentary question that his department was developing legislative proposals ‘to provide for the inclusion of health advice/warnings on alcohol drinks containers and on promotional material providing advice for pregnant women on the dangers of consuming alcohol and providing other health information to the consumer at the point of consumption’. According to the minister labeling is an important way of informing consumers about the dangers of alcohol. He also referred to a report in the British Medical Journal which linked alcohol abuse to different forms of cancer and stated that this seriously concerned him.

The Irish Times quotes the minister saying that ‘given the high level of consumption in this country this has to be a matter for serious concern. And it is seen as such by this Government.’ 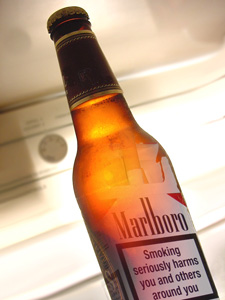